Lately it seems that before I can turn around, another month has gone by. Does it appear that way to everyone else? I’ve always heard that the older you get, the faster time flies. I hate to see what it might be like in another ten years! Anyway, it’s the first Wednesday of the month once again and time for Wildlife Wednesday, hosted by Tina and her blog My Gardener Says. I’ve been a bit neglectful of my blog over the past month. There really hasn’t been that much out of the ordinary wildlife in my garden and the hot temperatures have kept me mostly inside except for early mornings. The one example of wildlife really worth celebrating this month has to be the Ruby-Throated Hummingbirds (Archilochus colubris) that have been making their presence known. I hope you’ll excuse me if I go overboard!

Though I’ve had feeders out all summer, the Hummers have been busy ignoring them and keeping themselves busy feeding on the flowering plants, most notably Trumpet Vine (Campsis radicans) and Turk’s Cap (Malvaviscus arboreus). The blooms on both of these have about gone to the wayside, finally inducing these little garden denizens to take a chance on the magic liquid contained in the feeders.

Have you ever just settled down in a chair in front of a window or on the porch and watched Hummingbirds go about their business? If you haven’t then you’re really missing out on a spellbinding experience. These little (immature) guys or gals have been zipping around our garden, chasing each other and visibly staking out their territories.

Once they find a prime feeding area they stick close by, usually within just a few feet or so of a feeder.

They invariably perch on the same little twig in order to keep an eye on their food source.

If another of their kind happens by, a wonderful-to-watch chase scene ensues. If only I could have captured one such flight with my camera! I envy those who’ve been able to do so.

While I see Ruby-throated Hummingbirds throughout the day, they seem to be most active in the early morning  and late evening.

Look at the length of that bill!

They’re such tiny birds, measuring from about 2.8 inches to to 3.5 inches in length and weighing just fractions of an ounce!

For information on the Ruby-throated Hummingbird be sure to visit this page at the Cornell Lab of Ornithology website.

So what other wildlife did I see in my garden this month? Here are a few other birds…

…a Carolina Wren (Thryothorus ludovicianus) hopping around on some deck furniture. For being so small, these birds have a very loud voice. Carolina Wren pairs stay together for life!

…a White-winged Dove (Zenaida asiatica) sunbathing. The colors of this bird’s feathers form quite a contrast. Many birds exhibit colors in flight, or in a posture such as this, that you don’t normally see when they’re just perching on a utility wire or hopping around on the ground. White-winged Doves are now seen as far north as Alaska!

…a European Starling (Sturnus vulgaris) in the transitional juvenile form. Starlings can learn the calls of up to twenty other species of birds!

…a couple of juvenile Northern Mockingbirds (Mimus polyglottos). We didn’t seem to have many Mockingbirds this summer, yet young ones are beginning to prance around the yard in numbers. These two have been keeping fast company — perhaps they’re siblings? — and still exhibit some speckling on their upper breast and throat areas. Mockingbirds feed on insects and fruit!

And here are a few bugs…

…an Eastern Pondhawk (Erythemis simplicicollis) Dragonfly. I haven’t seen as many Dragonflies lately, but this one hung around long enough for me to take a few pictures.

…and a Pearl Crescent (Phyciodes tharos) Butterfly. These seem to come and go in small bunches. They visit for a while, disappear, then return.

August has not been a great month for butterflies. I’ve seen the odd Pearl Crescent (Phyciodes tharos) that I posted about in July, but things really came down to the wire this month. Fortunately I was able to snap a few photos of a Gulf Fritillary (Agraulis vanillae) visiting the garden just a few days ago. I’ve seen some of these butterflies previously this summer but they just seemed to be passing through — probably passing through my yard straight to someone else’s garden!

There is a Purple Passion Vine growing along our neighbor’s fence, so eventually there should be caterpillars munching on the leaves. We’ll keep the good thought!

I hope others had more luck searching out butterflies and their kin during August. We don’t have a great deal of plants in bloom at this time, so the pickings are thin as far as nectar goes as a food source. Hopefully as we head toward Fall the late bloomers will begin to attract more of these beautiful creatures.

Thanks for visiting my Butterfly Bucket List post for the fourth Sunday of August. If you’d like to take part please do so! While the meme posting day is the 4th Sunday of each month, feel free to post your sightings any time within the following week. Just put a link to your post in the comment section of this post. Butterflies, moths and caterpillars are all welcome!

Snow On The Mountain (Euphorbia marginata) is one of the few late summer plants that grows well in my garden. They’ve been in bloom for a couple of weeks now, adding at least a little color to my barren landscape. For information on this flower please see my post from earlier this year.

The close-up below highlights the intricate detail of the plant’s small flower clusters.

Here’s an even closer view. These flowers measure only about 3/8 of an inch across. If you don’t look closely at this plant you might miss the blooms altogether, as the most striking part of it remains the variegated white and green leaves.

The seeds of Euphorbia marginata take a while to form and dry. I usually end up picking the small pods off the plant and crushing them so I can drop the seeds where I’d like them to come up. The number of plants that come up in my garden doesn’t change much from one year to the next, so I’m guessing the rate of germination for these seeds isn’t very high.

Though small, the flowers do attract pollinators. Most of my plants, as they get larger, seem to be inhabited by a spider or two, also.

Snow On The Mountain (Euphorbia marginata) is a great addition to any garden, especially for those of us who must put up with hot, dry summers. They’re drought-tolerant and at this time of the year they brighten up an area that has reverted to mostly foliage.

Wildlife Wednesday, hosted by Tina and her blog My Gardener Says on the first Wednesday of each month, really sneaked up on me this time around! The day was half over before I finally remembered what it was that I’d been trying to remember all morning to remember to do… Wildlife Wednesday offers us gardeners — and everyone else, too — a chance to celebrate the wildlife in our gardens through pictures and prose. A multitude of thanks goes out to Tina for hosting this wonderful meme each month!

Summer has finally arrived in North Texas. Prior to today we had hit 100°F only three times this year — a mark that is way, way, way below average. This week, unfortunately, things will be back to “normal”, with the forecast for the next seven days calling for high temperatures ranging from 102°F to 106°F (approximately 39°C to 41°C) and heat indexes of 105°F to 112°F (approximately 40°C to 44°C). Blech! Not only will I not be venturing outdoors much over the next week or so, especially in the afternoons, neither will any wildlife that has any sense at all! So I guess it’s a good thing I’ve got a few critters to share this month — before we all start hibernating.

My garden visitors during the past month have been mainly birds and bugs. During the early part of July we were fortunate to receive a few inches of rain. Birds take cover where they can during downpours — these three found a perch atop a downspout coming off the roof.

The bird below appears to be a Juvenile White-Winged Dove (Zenaida asiatica).

Here’s another White-Winged Dove (Zenaida asiatica). He looks so pretty against the bright blue background of the sky.

Bet you didn’t know the White-Winged Dove made it into a Stevie Nicks song! My Hubbie’s a fan. What else can I say? 🙂

Here’s a Mississippi Kite (Ictinia mississippiensis) in our neighbor’s Live Oak Tree (Quercus virginiana). As one of the tallest trees in the neighborhood it affords these Kites a “birds-eye view” of their surroundings.

Western Kingbirds (Tyrannus verticalis) are an extremely common sight around my yard — especially since I finally noticed them and found out what they are! Quite a few broods have been hatched and raised in the Shumard Oak (Quercus shumardii) in our front yard. Below is a parent and a juvenile. The belly area of the adult is a deeper yellow than that of the juvenile.

Western Kingbirds are flycatchers, which makes them insectivores. In the photo below one of the parents (at bottom) is feeding the young ones. You might be able to make out a yellow grasshopper leg hanging from its mouth.

My favorite birds of the past month were by far the Ruby-Throated Hummingbirds (Archilochus colubris). Even though I have several feeders available for them, I’ve only seen them feeding on flowers.

This is either a female or an immature bird.

She — or he — spent the large part of a recent afternoon zipping around a Turk’s Cap (Malvaviscus arboreus).

The Ruby-Throated Hummingbird beats its wings about 53 times per second. No wonder my camera setting couldn’t keep up!

These small birds prefer to feed on red or orange flowers. I guess that’s why they’ve been so fond of the Turk’s Cap and the neighbor’s Trumpet Vine (Campsis radicans).

Now for the bugs…

Common Whitetail Skimmers (Plathemis lydia) have been very…well…common this summer! Here we have an adult male, an immature male and a female. The wing pattern of the female dragonfly is just the opposite of that of the male. 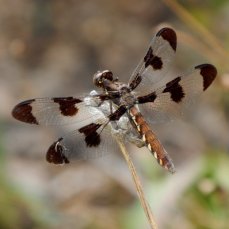 This appears to be a female or juvenile male Eastern Pondhawk. The male of this species of dragonfly gradually turns blue.

I’m not sure what species of Dragonfly this one is…

Here are a couple Damselflies. Maybe one day I’ll have the time and make an effort to identify them.

I think this is an Halictid Bee (Augochloropsis metallica). These are also called Sweat Bees.

And last but not least, I have an update on a recent post — Picture Perfect Monday: Nameless Beauty. This pretty little fly now has an identification. Its called a Feather-legged Fly (Trichopoda pennipes). Very apt, I would say!

That ends this month’s Wildlife Wednesday. I hope you enjoyed your visit and I’m glad you stopped by! For more wildlife head over to My Gardener Says. Thanks again to Tina for hosting this wonderful meme! 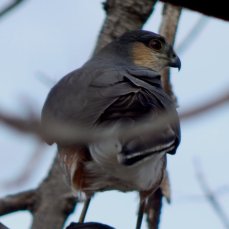 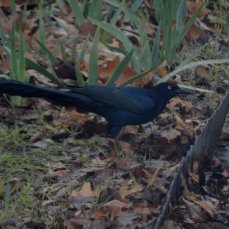 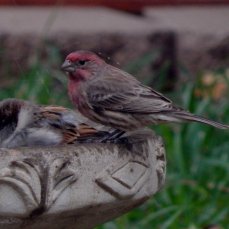 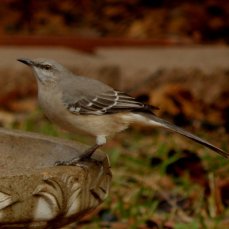 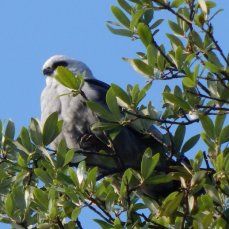 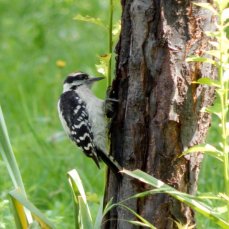 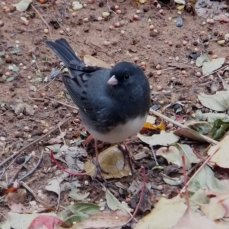 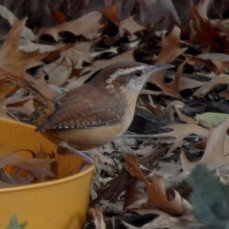 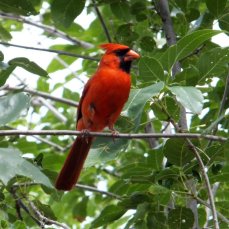 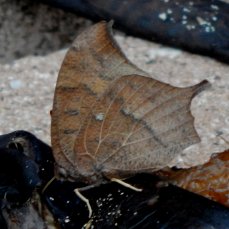 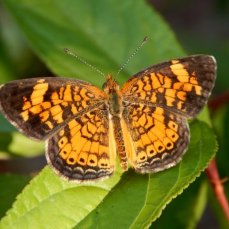 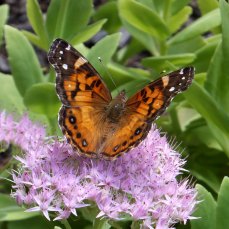 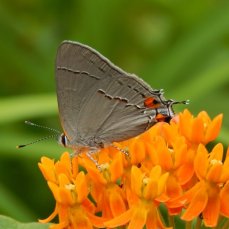 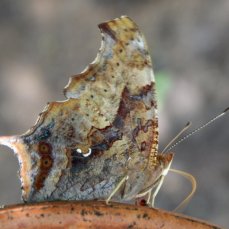 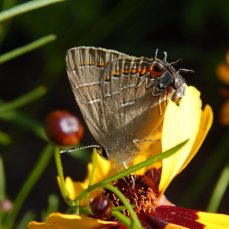 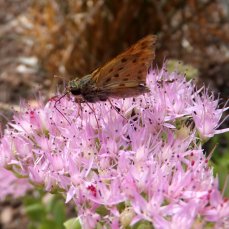 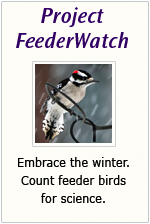 Visit My Other Blog